One of the challenges you'll have to solve to get Oracle JET and other Knockout.js applications to be updated dynamically via JavaFX is how and where to update Knockout.js view models.

Let's assume this is a typical Model-View-Controller application but we are adding an external Model-View-View-Model (MVVM) architecture for the View layer. Here is a diagram to illustrate: 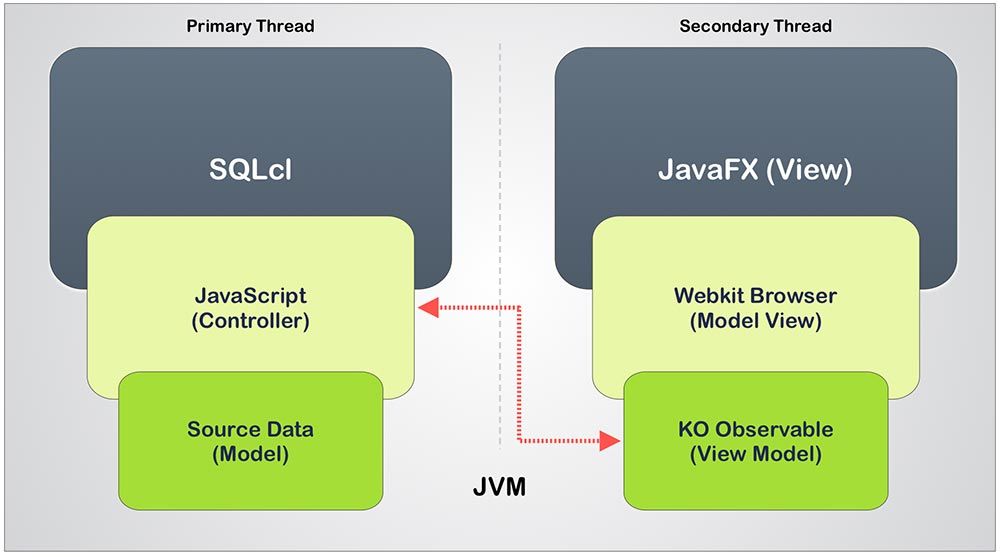 JS objects are created in your view model when the webpage is loaded.

And then finally bindings are applied to your HTML elements when the document is ready, using something like this:

This post is related to a piece of code I am working on to enable SQLcl to run Oracle JET charts. In my overall example for this post we are adding one more layer of complexity. SQLcl needs to act as the controller for the chart command I am creating. Check out this post for some background information.

This is a very similar concept as using Electron to pass data between an embedded Node.js application and an HTML view supporting the user interface.

What I need to do is to have SQLcl query some data from a database and then pass that data to the Oracle JET chart. This chart is built from HTML and JavaScript running in a separate thread as a JavaFX application.

I am running two threads (one for SQLcl and another for JavaFX) locally in one process within the same JVM.

I shouldn't really need to think about "remote" calls.

There are a handful of approaches for trying to accomplishing the goal with the solution parameters given above.

Jim's approach may ultimately be the right solution but I found assigning values to the Knockout generated observable objects a little tricky. I believe the marshaled objects are losing the function injected by Knockout. I need to do some more testing on this.

With the second option I was able to get and assign values to the WebKit window and document object model (DOM) directly but I found that it also obliterates the Knockout.js ko.observable injected function.

For now I have opted to go with a variation of option 3 above. I am calling a ko.observable JavaScript function from SQLcl.

This works by string concatenation in SQLcl and is executed in the browser by JavaFX's WebView using Engine.executeScript(...). For example:

The reference to sqlclApp is a global variable for the Oracle JET appController created in the opening require[] block of main.js.

I may end up switching this out for a hybrid approach of Option 2 and 3. For example:

Here is sample code for you to test this out on your own using the jjs command line utility that ships with Java 1.8+. You will need to have this installed before moving on. You will also need to be running this from a graphical operating system. We are "browsing the web" after all.

1. Pick a folder and create a new JavaScript file called simple.js and copy/paste in the following code or, even better, type it in if you are just learning.

2. Create a new HTML file in the same directory as the JavaScript file and call it simple.html then add the following HTML.

This HTML page includes an inline JavaScript function called update() that is used to update the contents of a <div> with an ID of "content". This function will be called from Nashorn after updating the temporary variable called data.

3. Open your DOS or MacOS / Linux terminal and enter the following commands:

If everything goes well you should see something like the following console and WebView output. This is an example of Option 2 and Option 3 from above combined into a single example. (i.e.: Setting a JS value and calling a JS function in the web browser from Nashorn.)

In this post we looked at several options for updating Knockout.js models from the Nashorn scripting context. I also talked about some pitfalls with trying to assign values directly to ko.observable functions vs. calling functions in the browser.

Finally, I wrapped up by giving some example code that you can run on your own using the jjs command-line utility that ships with Java 1.8+ to learn from and experiment with methods of updating the DOM from Nashorn.

This also demonstrates the concepts of multi-threading that are required because the JavaFX call to launch() is blocking.

Keep in mind that any updates you make to the WebView object need to happen on the JavaFX application thread. This requires you to use Platform.runLater(<Runnable>) which will execute the enclosed code on the correct thread.

I hope you found this post to be useful. 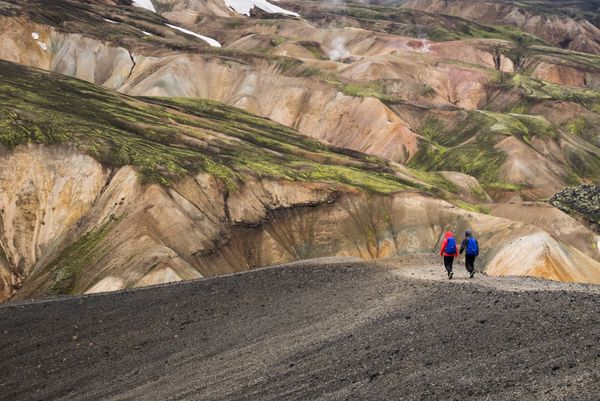 This is an example of connecting SQLcl and Oracle JET using the Nashorn scripting engine. Oracle JET application templates are deployed behind the scenes and data is loaded interactively from SQLcl sessions.