Whatever label you put on it - Cloud Computing, Something as a Service, Web Application, Etc... - there is no shortage of hosted software running on other people's servers. 'Tis the season for "RESTful web services" integration and JSON is definitely in the air. Oh, and Pis, lots of Raspberry Pis.

One night after class Rick Wurster, a buddy from school, and I were working on getting an RMI experiment off the ground. Objects on my laptop were going to call methods of objects on Rick's laptop remotely and get a response. Something magical happens the first time you see a console application echo responses from a remote object. In that moment we were standing on the shoulders of giants. We celebrated as geeks do with a high-five.

Thanks to all who worked on the technology stacks making that moment possible. 👍

By the late 90's the world was rapidly shifting to Hyper Text Transfer Protocol (HTTP) with innovations paving the way for what we think of in 2016 as RESTful web services. The approach to calling objects (business logic) on remote servers evolved over the years but the goal remained the same.

A bit of marketing glitz and glamour make them sound like the new hotness but REST-based services for integration have been proposed at least as early as 2000.

I started playing with the Raspberry Pi 3 B and at work we use a timekeeping system called Harvest. You don't need Harvest. I only mention it here because Raspberry Pi-envy and getting data out of Harvest and then into our resource forecasting application were the inspiration for what you are reading. Here is what I want to accomplish:

The architecture for this looks something like the following:

I actually built this solution twice. The first time I built it using an OEL VM with Oracle APEX 5.0.3 running on Oracle database XE. I used PL/SQL packages to parse the data into relational tables. Both solutions work however, the Node.js solution is a bit more flexible since it runs on Windows, Linux, OSX (and the Raspberry Pi!) and does not require a specific database.

If you already have a working Raspberry Pi 3 running Raspbian you can skip ahead. If you don't have a Raspberry Pi to work with you can still follow along, however, you need to adjust your steps for your own operating system and Node.js version(s). You can get an older version of the Raspberry Pi but I recommend a Raspberry Pi 3 B. I picked up 2 Vilros starter kits and so far they have been awesome. The Pi 3 B incorporates Bluetooth and WiFi so you won't need an adapter for wireless connections.

NB: You can get a manufacturer default / retail Micro SD card like this one but keep in mind you will have to go through some extra steps to get it ready for the Pi since it will not yet include the operating system or boot loader. If you pick up a starter kit the Micro SD card it comes with should already have the NOOBS boot loader and operating system installed and be ready to go.

Once you have a Raspberry Pi up and running you will need to install some software on it. When I setup my Pi for this use case I referenced this excellent post to get up and running. In summary, you need to:

Note: When logging into the Raspberry Pi over RDP using Microsoft Remote Desktop Client, don't try to add a domain. If you add a domain such as 'domain\user' you may cause xrdp to just show a black screen.

Install Node.js on Your Pi

Now that you have your Raspberry Pi basic setup complete you should be able to move on to installing Node.js. Connect to your Pi and open a terminal to complete the following: 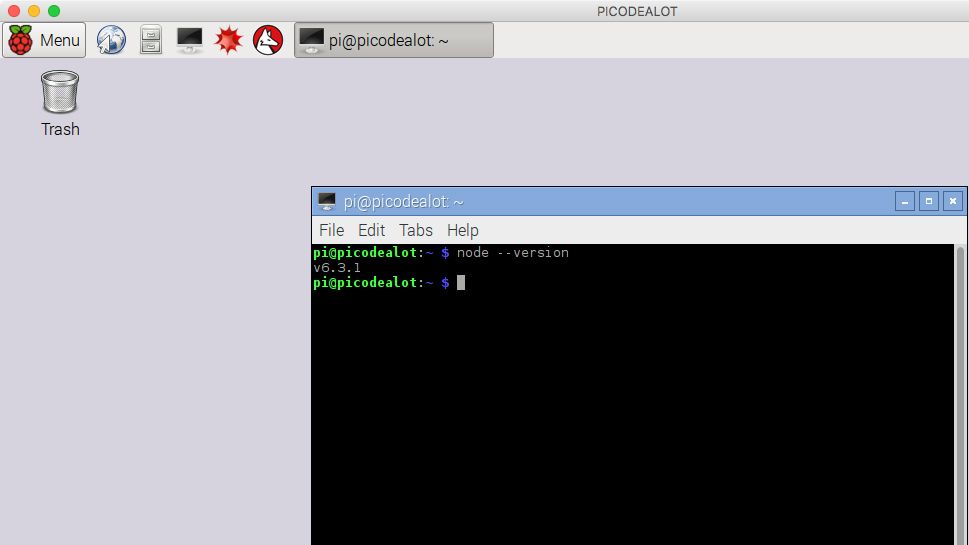 If you are new to Node.js then head over to nodejs.org and check it out. You will see sample code below but I recommend you dig into Node.js and play around on your own as well.

Install SQLite3 on your Pi

Now that we have Node.js installed lets move on to get a database installed on the Pi. You can use any database you can get running on the Pi (MySQL for example) however, I chose SQLite so that I can transport the database files and to keep my use case as simple as possible.

This should create an empty SQLite3 database file called test.db in your current working directory. You can delete this file if you don't need it anymore.

Unless noted otherwise, for the rest of this post I assume you are connected to your Raspberry Pi over SSH or on a terminal session on the Pi desktop directly or via RDP.

We are finally ready to setup our Node.js project! Using HTTP calls we will pull JSON data from a RESTful web service and load it into a SQLite3 database. Remember that my use case was for downloading data from Harvest however we will just use a generic web service that is publicly accessible. 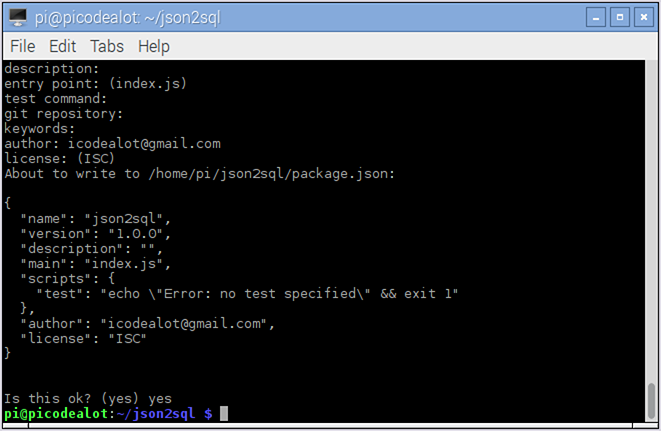 This will allow us to import the sqlite3 module into our Node.js application so that we can create tables, insert data and run SQL statements against our database. For the next step we will use a generic RESTful service to download a list of TODO items as JSON found at: https://jsonplaceholder.typicode.com/todos

This code will download a list of tasks from the web service in JSON format and print it to the console. It should have the following structure:

Note: This web service happens to be setup to return JSON data by default. You may find other web services are looking for HTTP request headers (or query strings in the URL) to indicate that you would like JSON data in response. HTTP headers are straight forward to setup if you supply a configuration object similar to the following instead of calling the URL directly.

Building on the example above we can now take the next step of parsing the JSON data into relational tables. There are many ways to do anything in Javascript. I don't claim this is the best or most efficient way, but for a proof of concept it works great. Also note, the structure of your JSON may result in nested objects. You would need to account for this in your own code if your JSON resulted in nested objects.

This example assumes each object returned has a single layer of key/value pairs as shown previously.

NB: This is a "dumb" implementation in that there is really no error checking. Also, the columns are hard-coded. This can be made dynamic with a little more work on the JSON parsing front.

With that we should now see data being downloaded and inserted into our table when we run node get_data.js. The select statement at the end is just for testing / proof that we actually got the data into our table and you should see something like this on your Pi terminal. 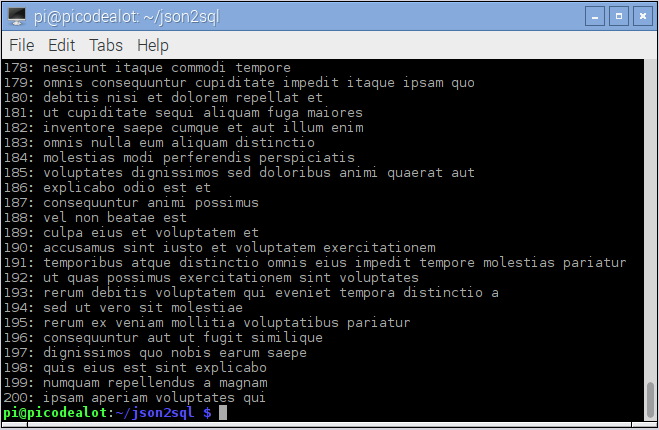 Keep in mind: this is a simplified example. The RESTful web service I am using in this example is not under my control and they have some rate limiting that may cause you errors along the way if you call their service too frequently.

Now that we have the data in a relational database we can go anywhere with it including other business processes or tools that can read from our relational database via SQL statements. For the final step in my use case, I am doing some mapping / ETL and loading data into another internal application. Hopefully you found something useful here and this helps you along the way.

Oracle JET (JavaScript Extension Toolkit) - hereafter JET - is a collection of open source JavaScript technologies for building client facing web applications. Oracle had this to say about it:

In this example I am referring to a RESTful web services framework created by Oracle however, you could substitute your own web server / web application framework / RESTful service as well. Oracle REST Data Services (ORDS) sits on top of the Oracle database and allows